A tiny, do-it-yourself microscope — which can be built from instructions posted online — has opened a new universe to brain scientists in at least 200 labs worldwide, and the device has earned its creators at UCLA an $8.3 million grant from the National Science Foundation.

When mounted on an animal’s head, the “miniscope” enables scientists to observe neurons firing, and even the creation of memories. The five-year grant will allow the scientists to further refine their design to combine electrical and optical recordings, which will give them the ability to visualize how brain regions and large groups of brain cells work together as the brain senses, learns, plans and executes actions.

A key feature of the team’s grant proposal was that the researchers are making information about how to build and use the device available for free to other scientists.

“Other research groups have taken our base model and added to it and are starting to publish papers based on what they’re discovering with it,” said Dr. Peyman Golshani, an associate professor of neurology at UCLA and the grant’s principal investigator. “It’s really taking off.”

Using the device, scientists can compare the brains of healthy mice with mice that have certain neurological conditions. UCLA scientists, for example, are especially interested in using the miniscope to study why chronic seizures interfere with memory and which circuits malfunction in autism. 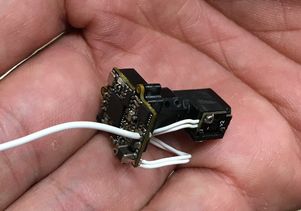 In addition to Golshani, other researchers working on the grant are professors Tad Blair, Jason Cong and Alcino Silva, Sotiris Masmanidis and Daniel Aharoni, all of UCLA; and Alipasha Vaziri, a professor at Rockefeller University.

The project was born in 2011, when Golshani read about a miniaturized microscope developed at Stanford University that was light enough to be worn by a laboratory mouse. Typically, microscopes used to observe neuronal activity in animals are heavy and could only be used while fixed in place; a mobile version opened the door to all sorts of possible research, including the prospect of watching the neurons in a mouse’s brain as it explored its environment or interacted with other animals.

But a commercialized version of the Stanford microscope system costs about $150,000. Golshani wondered if his lab could build a cheaper model that could be shared with other researchers, and he asked Aharoni to make one from scratch. Within four months, researchers from Golshani’s and Silva’s labs and other UCLA collaborators had produced their own version, made mostly from off-the-shelf parts that collectively cost about $1,000.

The device they built is 1 inch tall and weighs just 4 grams, about the same as four cotton balls. It snaps onto a baseplate that is implanted atop a mouse’s head. Through a small window, the miniscope captures fluorescent light emitted by thousands of neurons as they fire, and a thin wire carries data from the device’s lens to a computer for analysis.

The UCLA scientists posted parts lists and instructions for building and using the device, as well as links to video tutorials, on their own wiki page, which has become a forum for conversations with other scientists from around the world. One researcher posted a note to say that a 2 gram model would be helpful for recording brain activity in songbirds, which prompted the UCLA team to produce a lighter version of the microscope. Another request from a scientist who studies bats prompted Golshani’s lab to create a battery-powered wireless version that saves data onto a micro SD card.

Blair and Cong are currently refining the wireless miniscope to give it built-in, energy-efficient computing capability for real-time feedback and analysis. Masmanidis is developing silicon-based electrodes that can record electrical signals from the brain while the miniscope records imaging data.

The NSF grant comes from the organization’s Neuronex program, which is intended to help create an ecosystem of new tools, resources, and theories and spread them throughout the neuroscience community, said Jim Olds, NSF assistant director for biological sciences, in an NSF news release.

Golshani said, “We’ve given this to the community and the community is using it. If you build a tool and let a lot of people use it for their own research, the impact is much, much larger than if you keep it to yourself.”