Dr. Huda Zoghbi, a Baylor College of Medicine professor whose work holds promise for treating a range of neurological and neuropsychiatric disorders, received an annual award for excellence in biological and biomedical sciences research from the David Geffen School of Medicine at UCLA.

The medical school’s dean, Dr. Kelsey Martin, presented Zoghbi with the 2017 Switzer Prize during a Feb. 16 ceremony. Zoghbi received a $25,000 honorarium and a statuette.

“Her story is a beautiful illustration of the connection between medicine and science, and a lesson in the value of maintaining curiosity and open-mindedness,” Martin said.

Zoghbi, who holds faculty appointments at Baylor in pediatrics, molecular and human genetics, neurology, and neuroscience, said she was humbled by the recognition and hopeful that her work inspires a new generation of physician-scientists. 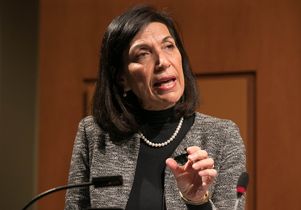 “If you would like to work on something, don’t let anybody tell you otherwise,” Zoghbi said.

She delivered her Switzer Prize lecture, “Genetic and Neurophysiological Approaches to Tackle Neurodevelopmental Disorders,” to an audience of about 250 in UCLA’s Neuroscience Research Building auditorium. Zoghbi also met with UCLA research fellows, doctoral candidates and faculty to share insights from her career.

After treating patients for years as a pediatrician, she became fascinated with the origins of disease and undertook a three-year fellowship to acquire research training.

Her lab at Baylor identified a gene mutation that causes Rett syndrome, a genetic disorder leading to loss of language and motor skills, primarily in young girls. The discovery paved the way for a genetic test to diagnose the disorder. With collaborator Harry Orr, Zoghbi also identified the gene mutation responsible for spinocerebellar ataxia 1, a neurodegenerative disorder that progressively worsens balance and coordination.

Those and other discoveries by Zoghbi have created new areas of inquiry with the potential to advance diagnoses and treatments of neurological diseases such as Alzheimer’s and Parkinson’s and neuropsychiatric disorders such as autism and juvenile-onset schizophrenia.

The Geffen School of Medicine established the Switzer Prize to promote the importance of the basic science research that is essential to continued improvements in patient care. Such research is a priority at UCLA’s medical school. The award is named in recognition of Irma and Norman Switzer, a Los Angeles couple who bequeathed $50 million to the medical school.

Nominations for the 2018 Switzer Prize are being accepted through March 30.