Family travels 7,500 miles to save son’s life with treatment developed at UCLA

When he was born in September 2015, Hussein El Kerdi looked like a healthy baby boy. No one knew that his immune cells lacked an important enzyme. But the absence of that enzyme would profoundly change the El Kerdi family's life, sending them on a journey from their small hometown in Lebanon to UCLA. Their one goal: to save Hussein's life.

The disorder is caused by a genetic mutation that results in lack of the adenosine deaminase enzyme, without which immune cells cannot fight infections. Babies with the disease must remain isolated in germ-free environments to avoid exposure to viruses and bacteria. If the disease is not treated, even a minor cold could be fatal, and babies with the condition typically do not survive past their second birthday.

Dr. Donald Kohn, a physician-scientist at the Eli and Edythe Broad Center of Regenerative Medicine and Stem Cell Research at UCLA, has been perfecting a stem cell gene therapy for bubble baby disease for more than three decades. The treatment uses blood-forming stem cells, which have two important properties: They can make exact copies of themselves and they can produce all of the cells that make up the blood system, including immune cells such as T cells.

Kohn's treatment involves removing those blood-forming stem cells from the patient’s bone marrow and correcting the genetic mutation by inserting the gene responsible for making adenosine deaminase. The corrected stem cells are then infused back into the patient, where they begin producing a continual supply of healthy immune cells that are capable of fighting infection.

Kohn, whose work focuses on genetic blood disorders, received approval from the U.S. Food and Drug Administration in 1993 to test the treatment in clinical trials. Since then, 30 out of 30 babies with the condition have been cured in six trials run by Kohn; data from a seventh trial is currently being analyzed.

In Lebanon, Hussein's father, Ali, and mother, Zahraa, had heard nothing about the treatment. They were told that there had been no other cases of bubble baby disease in the Middle East, and that Great Britain and the U.S. were the only places where this experimental treatment was available.

With help from family and friends, the El Kerdis created a plan that would eventually bring them to UCLA. A relative who is a doctor in Michigan emailed Kohn to tell him about Hussein, and Kohn — along with colleagues from the UCLA Broad Stem Cell Research Center, the David Geffen School of Medicine at UCLA and UCLA Mattel Children's Hospital — began to make arrangements for the El Kerdis' arrival and Hussein’s treatment.

In April 2016, the family arrived in Los Angeles; Hussein was six months old and desperately ill.

"I hadn't seen a patient like Hussein in 15 or 20 years," Kohn said. "About three to four weeks in, I thought he wasn't going to make it through. But he did."

Each day leading up to his stem cell gene therapy treatment, Hussein became stronger thanks to the expert care provided by the pediatric intensive care unit at the children's hospital.

On July 12, 2016, some of Hussein's bone marrow was removed and blood-forming stem cells were extracted from it. Two days later, after the cells were genetically modified, they were infused back into Hussein. Over the next couple of months, the stem cells began to create immune cells that produce adenosine deaminase. By the beginning of that September, just a few weeks before his first birthday, Hussein was healthy enough to go home.

Evangelina’s story: Another baby with the condition is cured

Before leaving UCLA, the El Kerdis celebrated Hussein’s birthday with Kohn and several of the nurses who cared for him. During the celebration, Ali and Zahraa expressed their gratitude. 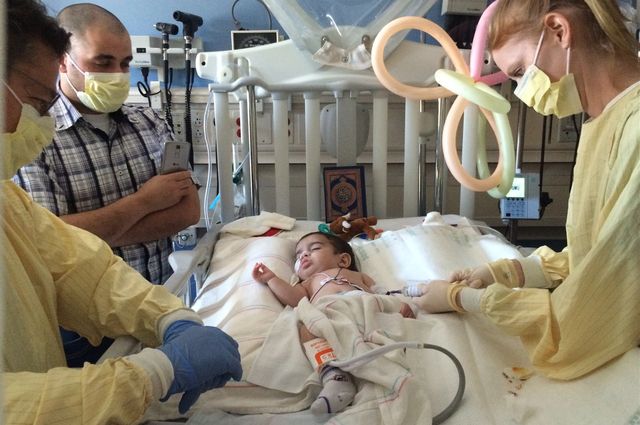 "I hope that when Hussein grows up, he comes to the States and gets educated to be a doctor at UCLA," Ali El Kerdi said. "On behalf of myself and my wife and child, I want to say thank you to Dr. Kohn and to UCLA and to all the people who helped bring this miracle to life."

Now, nearly two years after the procedure, Hussein is healthy and thriving at home with his family.

Orchard Therapeutics, a biotechnology company that was launched in 2016, is working to bring the therapy that Hussein received to more patients.

The company has a research partnership with UCLA to develop the treatment that Kohn created as a frozen product, which would allow it to be used at other medical centers. Kohn is hopeful that the treatment, called OTL-101, will be approved by the FDA in due course so that it can be made available to hospitals across the U.S.

Kohn is currently conducting clinical trials that test similar stem cell gene therapy techniques for other blood diseases, including sickle cell disease, which is the most common inherited blood disorder in the U.S.

Kohn is a paid member of the Orchard Therapeutics scientific advisory board; on behalf of the Regents of the University of California, the UCLA Technology Development Group has licensed intellectual property related to the ADA-SCID treatment developed by Kohn to the company.