For stressed-out commuters, joining a vanpool might be one step toward a more relaxed 2016. A UCLA study shows that vanpooling drastically lowers the stress of commuting.

“Riders indicated that participating in a vanpool was a source of dramatic reduction in stress and some even said that it was therapeutic,” said Wendie Robbins, the study’s lead researcher and a professor in the UCLA School of Nursing and in the Fielding School of Public Health. “Riders said that their time on the van was restful and provided a chance to meditate, relax, listen to music or just be at peace.”

Vanpooling has long been touted as a way for riders to reduce pollution and traffic while saving money. While there have been studies on the health benefits of active commuting — walking or bicycling — as well as those of taking a bus or train, the health impact of vanpooling hasn’t previously been studied.

“Health Effects of Vanpooling to Work,” published in the journal Workplace Health and Safety, looked at passengers’ and drivers’ perceptions of how vanpooling affected their health and well-being.

Participants were recruited through the UCLA Vanpool Program, which has nearly 1500 participants and is one of the largest employer-based vanpool programs in California. Researchers conducted focus groups with 40 vanpool riders and two drivers.

“We know that driving alone is very isolating and creates stress,” said Penny Menton, director of communications and commuter services for UCLA Transportation. “When you ride with others, you become connected and create an environment of relaxation and interaction.” 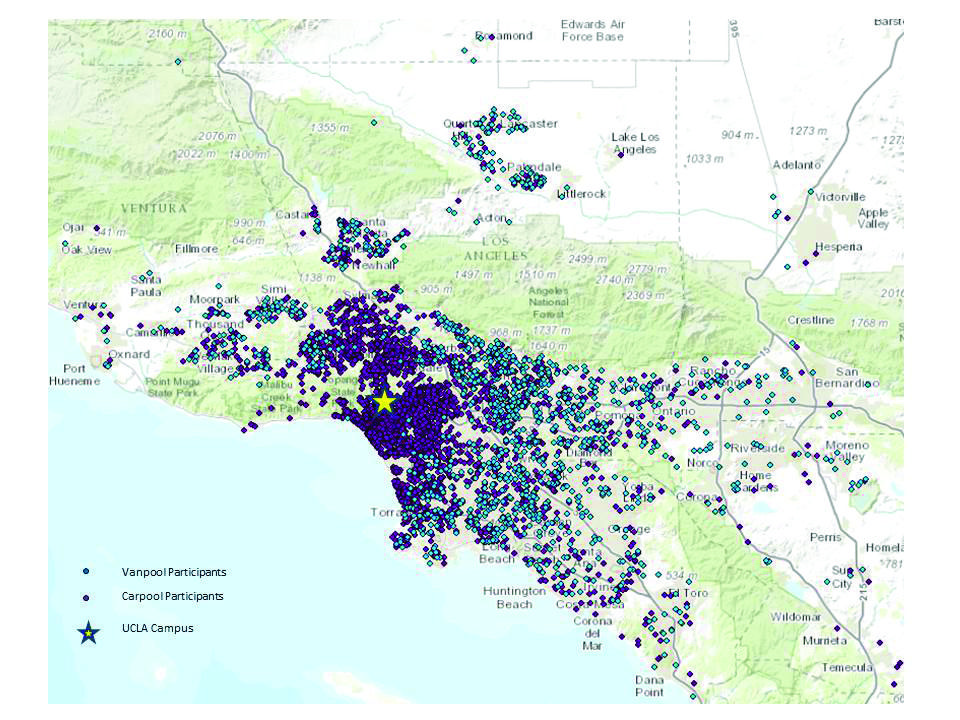 UCLA carpool and vanpool participants commute from far and wide.

The researchers were surprised by riders’ fierce commitment to vanpooling, Robbins said. “You have to give up independent choices – when you leave, the temperature in the van, who you ride with. Riders are willing to compromise for the reduced stress of not having to drive.”

Menton, one of the original creators of the UCLA Vanpool Program, agreed. “We started this program almost 32 years ago to help reduce traffic during the 1984 Summer Olympics. We have riders who have been with the program since the beginning, including two drivers, and the only way they leave is when they retire. The vanpool becomes like family.”

One of these longtime fans is Stan Paul, who works at the UCLA Luskin School of Public Affairs and commutes more than 160 miles round-trip each day from the Inland Empire. Paul has been a volunteer driver for most of that time. His vanpool gets 10 other UCLA employees to work and back, and takes that many cars off the road.

“For me, there really hasn’t been any other viable alternative since I started,” Paul said. “I would give up the commute in a second, but not the vanpool as long as I do have to commute.”

Riders did mention a few downsides, including disturbed sleep patterns and the risk of illness, but they saw these as relatively minor issues.

“For many of the vans, napping has become a norm, something that many riders actually look forward to,” Robbins said.

The next steps in the research are to quantify the health impacts of vanpooling, both positive and negative, and potentially to develop strategies to address them. For example, if some vanpoolers experience resultant sleep issues, employers could develop programs for employees to improve sleep habits.

The study’s other authors were Barbara Berman, professor emerita in the UCLA Fielding School of Public Health, and Dawn Stone, a Ph.D. candidate in the UCLA School of Nursing.

The study was funded by the UCLA Foundation/Mary Ann Lewis Enhancement, the UCLA Center for Occupational and Environmental Health, the National Institute for Occupational Safety and Health and the Southern California Education and Research Center.