Maria de Jesus and Maria Teresa Alvarez, the formerly conjoined Guatemalan twins who were separated in 2002 at Mattel Children’s Hospital UCLA in a landmark 23-hour surgery that was followed around the world, returned to UCLA today to visit with pediatric patients and the medical staff who cared for them for many months.

The girls, who were nicknamed the “two Marias” by hospital staff, are now 14 and live near each other in Southern California with two adoptive families. Maria de Jesus, now called Josie, spent the holidays back in 2002, in the hospital with her sister Maria Teresa, now known as Teresita. To bring cheer to Mattel Children’s Hospital patients this year, Josie, along with her sister, decided to visit with a few of them. 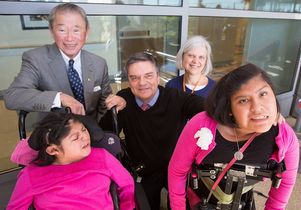 The twins, along with a team of volunteers, decorated the rooms of several pediatric patients and reunited with the doctors and nurses who cared for them 13 years ago. A tearful reunion took place when a member of the hospital's housekeeping staff, who visited the twins daily during their long hospital stay back in 2002, met the twins again, along with Jenny Hull, Josie's adoptive mother.

Teresita and Josie were born conjoined at the head in Guatemala in 2001. With the help of Mending Kids International, they were brought to UCLA and, after months of preparation for the complex procedure, underwent surgery on Aug. 6, 2002. The dramatic story of the “two Marias” captured the world’s attention.

The surgical team, which included more than 40 health-care professionals, was led by Dr. Jorge Lazareff, who was director of pediatric neurosurgery, and Dr. Henry Kawamoto Jr., who was the surgical director of the UCLA Craniofacial Clinic. The two physicians and anesthesiologist Dr. Barbara Van De Wiele were among the team leaders who welcomed them back today.

"The outcome of the twins is a testament to the whole UCLA medical community — nurses, doctors, social workers, therapists, volunteers and more — coming together to help these girls," Lazareff said, "as well as to Los Angeles’ large Guatemalan community, who sent $10 and $20 bills to support their expenses during their time here."

Also on the team were five neurosurgeons, five plastic and reconstructive surgeons, two pediatric surgeons, the chief resident of neurosurgery,10 anesthesiologists, a nursing staff of 14, the director of pediatric critical care and other personnel. 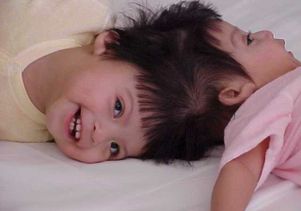 UCLA
The twins were born joined at their heads before UCLA surgeons separated them in 2002.

Following their successful operation and months of recovery, the girls returned to their parents’ home to Guatemala. Within four months of their return, however, both girls fell ill, with Teresita contracting meningitis. It became apparent to their health care providers that their fragile medical conditions were too complex for their family and Guatemalan physicians to handle.

Today, the girls remain in Southern California, see each other several times a week and Skype regularly with their Guatemalan parents. Josie is mainstreamed in school and is incredibly social. Her favorite activities are swimming and singing. She has learned to walk using quad canes. Teresita has had to overcome more medical and developmental obstacles than her sister, but she enjoys going to school, where she participates in art, music and computers. She also likes to swim and go horseback riding.

Even though she is non-verbal, Teresita is extremely communicative. Despite their physical separation, the twins still remain very close — maintaining their secret way of communicating as they have since birth.

“It is always wonderful for me to see the girls," said Dr. Van De Wiele. "I was so impressed that it was Josie’s idea to do something for the children who are in the hospital at this time of year. Giving comes full circle.”