Ozcan Research Group/UCLA
Researchers can detect spatial frequencies of a fluorescent image, which are then analyzed to sense the target fluorescence signal through the skin.

UCLA researchers working with a team at Verily Life Sciences have designed a mobile microscope that can detect and monitor fluorescent biomarkers inside the skin with a high level of sensitivity, an important tool in tracking various biochemical reactions for medical diagnostics and therapy.

This new system weighs less than a one-tenth of a pound, making it small and light enough for a person to wear around their bicep, among other parts of their body. In the future, technology like this could be used for continuous patient monitoring at home or at point-of-care settings.

The research, which was published in the journal ACS Nano, was led by Aydogan Ozcan, UCLA’s Chancellor’s Professor of Electrical Engineering and Bioengineering and associate director of the California NanoSystems Institute and Vasiliki Demas of Verily Life Sciences (formerly Google Life Sciences).

Fluorescent biomarkers are routinely used for cancer detection and drug delivery and release among other medical therapies. Recently, biocompatible fluorescent dyes have emerged, creating new opportunities for noninvasive sensing and measuring of biomarkers through the skin.

However, detecting artificially added fluorescent objects under the skin is challenging. Collagen, melanin and other biological structures emit natural light in a process called autofluorescence. Various methods have been tried to investigate this problem using different sensing systems. Most are quite expensive and difficult to make small and cost-effective enough to be used in a wearable imaging system.

To test the mobile microscope, researchers first designed a tissue phantom — an artificially created material that mimics human skin optical properties, such as autofluorescence, absorption and scattering. The target fluorescent dye solution was injected into a micro-well with a volume of about one-hundredth of a microliter, thinner than a human hair, and subsequently implanted into the tissue phantom half a millimeter to 2 millimeters from the surface — which would be deep enough to reach blood and other tissue fluids in practice. 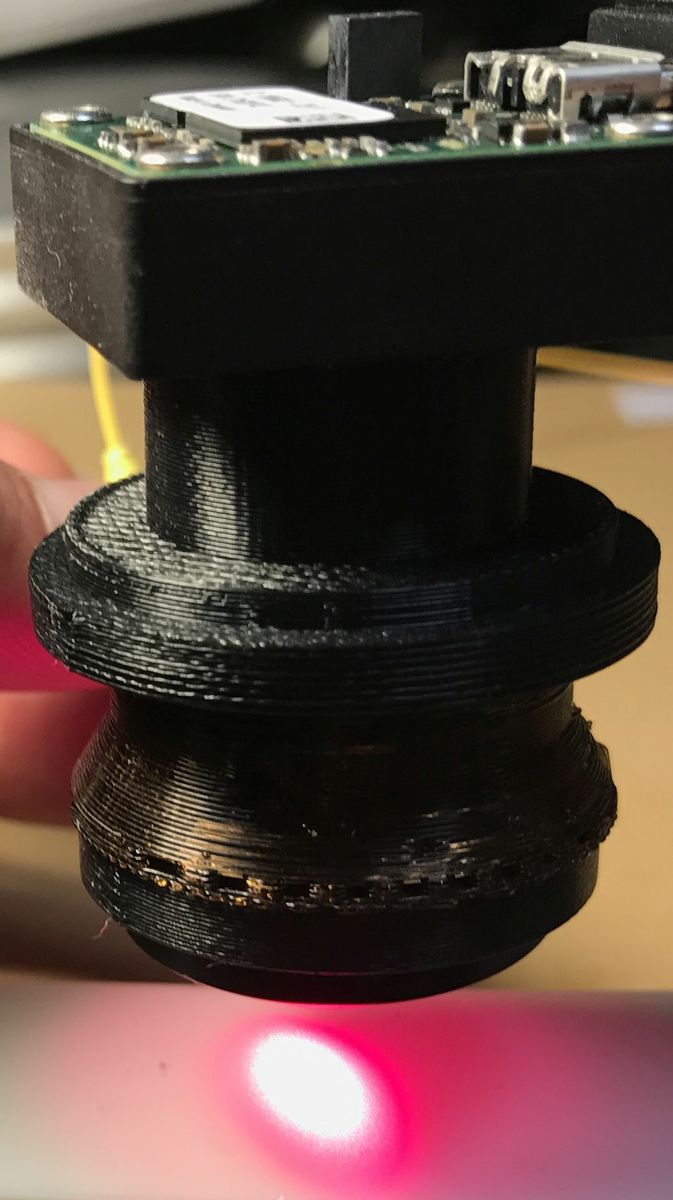 Ozcan Research Group/UCLA
This microscope can monitor fluorescent biomarkers inside the skin.

To measure the fluorescent dye, the wearable microscope created by Ozcan and his team used a laser to hit the skin at an angle. The fluorescent image at the surface of the skin was captured via the wearable microscope. The image was then uploaded to a computer where it was processed using a custom-designed algorithm, digitally separating the target fluorescent signal from the autofluorescence of the skin, at a very sensitive parts-per-billion level of detection.

“We can place various tiny bio-sensors inside the skin next to each other, and through our imaging system, we can tell them apart,” Ozcan said. “We can monitor all these embedded sensors inside the skin in parallel, even understand potential misalignments of the wearable imager and correct it to continuously quantify a panel of biomarkers.”

This computational imaging framework might also be used in the future to continuously monitor various chronic diseases through the skin using an implantable or injectable fluorescent dye.