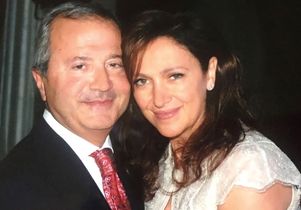 Tamar and Vatche Manoukian have made a landmark gift to the Division of Digestive Diseases at the David Geffen School of Medicine at UCLA that will provide unrestricted funds to accelerate research, innovative clinical care and educational priorities. This generous effort has inspired additional anonymous pledged support, bringing the total of the gift on behalf of the Manoukians to $30 million to benefit the division and support crucial initiatives in the Geffen School of Medicine.

In recognition of the Manoukians’ leadership philanthropy, the university will name the division in their honor — making this the medical school’s first division to be named following a philanthropic gift. In addition to the UCLA Vatche and Tamar Manoukian Division of Digestive Diseases, the university has named 100 UCLA Medical Plaza the Vatche and Tamar Manoukian Medical Building.

“The science that will emerge from the Manoukians’ extraordinary contribution will lead to the discovery of new drugs and therapies that will improve health and save lives,” said UCLA Chancellor Gene Block. “Their generosity is an inspiration to our talented physicians and to other members of the philanthropic community.”

The UCLA Division of Digestive Diseases is renowned for its comprehensive research. Ranked No. 5 in the nation by the U.S. News & World Report 2016–17 survey, the division has become a model for coordinated care.

“Visionary philanthropy can alter the course of science,” said Dr. John Mazziotta, vice chancellor for UCLA Health Sciences and CEO of UCLA Health. “The remarkable generosity of Tamar and Vatche Manoukian will be instrumental in positioning the division for the future.”

Building on an interdisciplinary and collaborative clinical approach and bolstered by pioneering laboratory science, division physicians provide the tools for patients to manage chronic disease, the technologies to save lives and the therapies to ensure cures for some of the most challenging conditions.

“Innovation requires both leadership and investment,” said Dr. Eric Esrailian, Co-Chief of the Division of Digestive Diseases and Lincy Foundation Chair in Clinical Gastroenterology in the Geffen School of Medicine. “Tamar and Vatche’s exceptional philanthropy will help ensure that UCLA can continue unraveling the mysteries of digestive diseases, make transformative scientific discoveries, and develop the physician leaders of the future. Their unrestricted gift gives the division flexibility that is essential as we advance our highest educational, research and patient care priorities.”

A leader in the global Armenian community, Vatche Manoukian has been involved in a wide range of businesses, including property investment, retail, pharmaceuticals, biotechnology, entertainment and renewable energy. He and his wife, who have four children, have continued his family’s tradition of charitable work throughout the world, with a particular emphasis on education, medicine, culture, the environment and Armenian causes.

The Manoukians’ scholarship funds have enabled several thousand students who lack financial resources to further their education, and postgraduate programs established by the Manoukians at universities in the United States, the United Kingdom and Lebanon have helped provide essential skills for tomorrow’s community leaders.

The couple support many children’s charities around the world, such as the National Society for the Prevention of Cruelty to Children; the U.S. Fund for UNICEF, on whose board Manoukian serves; and the Prince Albert II of Monaco Foundation. They also support the Royal Opera House in London. The Manoukians have been the sole financial supporters of major cultural exhibitions, such as the “Treasures of the Ark” exhibition held at the British Library to commemorate 1,700 years of Armenian Christianity.

“Tamar and I believe that philanthropy can shape the future,” Manoukian said. “It is our hope that our gift will not only change medical science, but also be a model for others. We hope that young people will be inspired to give and will become engaged with causes that matter.”

This significant investment in the division of digestive diseases will provide vital funding for pioneering investigations that will lead to novel therapies, more comprehensive patient care, faculty support to attract top scientists and clinicians, and the education of aspiring doctors and researchers.

“This gift is especially meaningful to us as a public university,” Esrailian said. “This investment will help fuel additional discoveries of the kind that have already earned UCLA the reputation as a world leader in research, patient care and medical education.”

The gift is part of the $4.2 billion UCLA Centennial Campaign, which is scheduled to conclude in December 2019 during UCLA’s 100th anniversary year.