Cheers of gratitude, applause and homemade "thank-you" signs greeted the wounded warriors of UCLA Operation Mend as they walked down Fifth Avenue in New York City during America’s Parade, the country’s oldest and largest celebration of service on Veterans Day. Roughly 500,000 spectators lined the 1.3-mile route as countless American flags were proudly waved.

A contingent of more than 50 people, including 10 veterans, their family members, program staff and supporters, walked behind a large Operation Mend banner at an annual parade that is designed to raise awareness of issues faced by all veterans, but especially by those who returned from Iraq, Afghanistan and other post-9/11 conflicts. 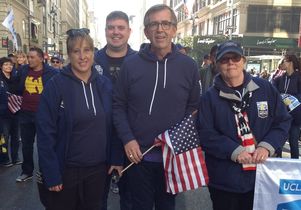 UCLA Operation Mend provides medical treatment as well as psychological support to this most recent generation of veterans injured during combat operations or while training for service. Founded in 2007, the program is a collaboration among UCLA Health in Los Angeles, the United States military and the Department of Veterans Affairs to help treat the wounds of war.

This was the sixth year that a group representing Operation Mend took part in the parade in New York City. The trip also offered the veterans and their families an opportunity to get to know each other and share their experiences.

“Spending time with other veterans in New York is important because we can all relate to each other,” said U.S. Army Corporal Pablo Mena who suffered injuries while serving in Afghanistan.  “And it’s an opportunity to let other wounded warriors out there know that help is available through the Operation Mend program.”

Operation Mend provides advanced surgical and medical treatment, comprehensive psychological-health support and an intensive treatment program for post-traumatic stress disorder and traumatic brain injury for post-9/11 service members, veterans and their families at no cost. The program is available to eligible warriors injured during combat operations or while training for service. All medical care, travel and accommodations are provided free to Operation Mend participants and their families.

To learn more or to donate, visit www.operationmend.ucla.edu. 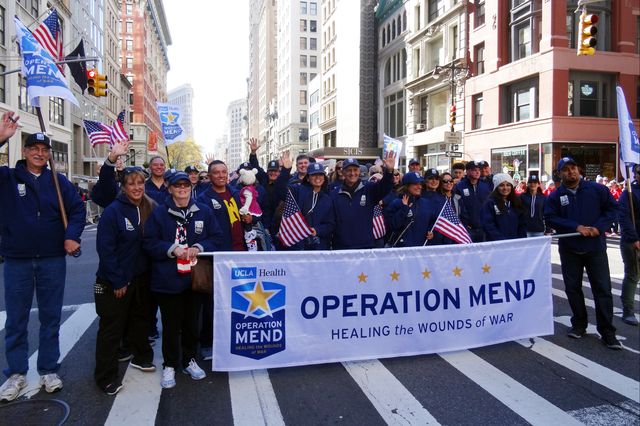 Ryan Hatoum
Veterans and their family members were among the 50 people representing UCLA Operation Mend in a Veterans Day parade in New York City.