UCLA medical students luck out on Match Day, and that's no blarney

There was a reason why many UCLA medical students and their families wore emerald green this St. Patrick’s Day. Superstition aside, a little leprechaun luck could only help their circumstances.

This year, the holiday coincided with Match Day, the day when 40,000 aspiring doctors nationwide find out simultaneously which hospitals have accepted them for 30,000 residency slots across the United States.

The annual Match Day ceremony, held for the first time in the newly opened Geffen Hall — part of the David Geffen School of Medicine at UCLA — peaked in a mad scramble as 170 future doctors rushed to tear open blue and gold envelopes, with excited families and friends looking on, waiting to hear the news.

Depending on the students’ chosen specialty, their residency match for advanced training determines where they will live and work for the next three to seven years, starting in July. 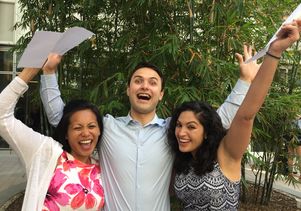 This year, almost 70 percent of the class chose to remain in California. “I think the winter weather back east took its toll on the recruitment process,” teased Dr. Lee Miller, associate dean for student affairs, as he welcomed the capacity crowd of students, their families and friends.

Among other Match Day statistics:

Here are some of the UCLA medical students who met their match today:

Jasmin-Ann Reyes, 34, who grew up seeing some of her friends become pregnant as early as the 8th grade, is pursuing a career in obstetrics-gynecology. After graduating this June with a dual M.D./M.A. degree in public policy, she wants to work in health care administration and increase low-income women’s access to reproductive health resources. She matched at the University of Hawaii.

Razmik Ghukasyan, 26, grew up in war-torn, post-Soviet Armenia, where essential resources like natural gas, electricity, running water and food were scarce. When he was 14, his family won the green-card lottery and emigrated to the U.S. He quickly progressed in high school from ESL (English as a second language) classes to advanced placement, and graduated with honors from UCLA. In medical school, he was named a Leader of Tomorrow and was awarded a four-year scholarship. He will graduate in June with a joint M.D./M.B.A. degree. Inspired by his uncle, who died at age 48 of pancreatic cancer, he plans to pursue a career in surgical oncology at UCLA.

Pooja Upadhyaya, 28, launched a global health nonprofit called Mobilizing Health in college. She and her team helped 5,000 rural patients in India communicate with their local doctors via text messages. Midway through medical school, she also earned a master’s degree in public administration. She will pursue a residency in general surgery at Brigham and Women’s Hospital and aims to increase patients’ access to care by working to improve the health care system.