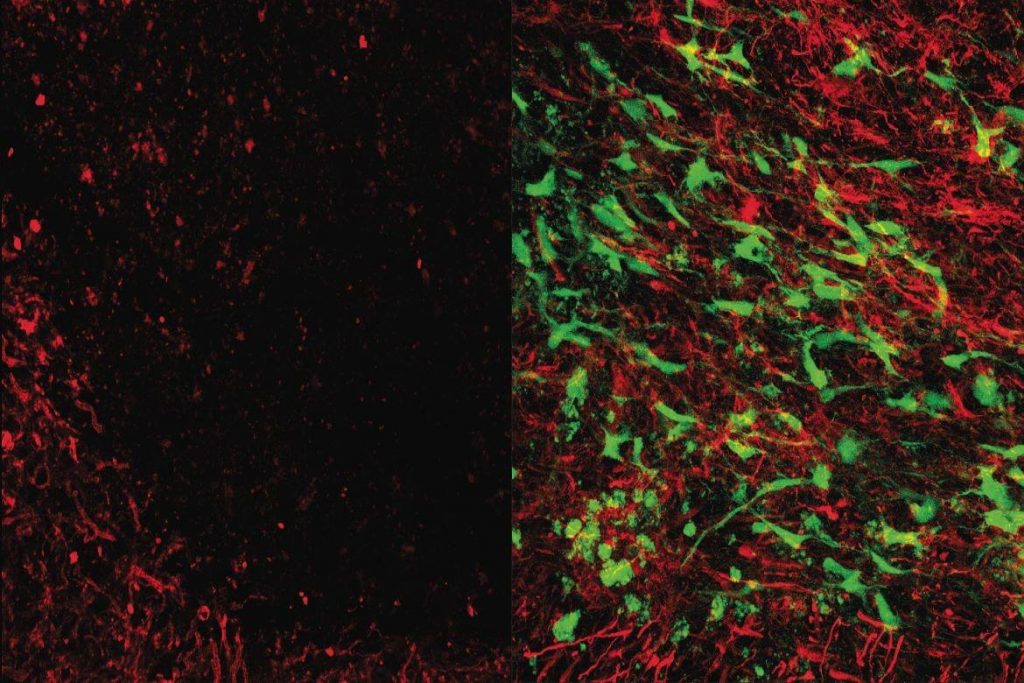 Microscope images show brain tissue that has been damaged by white matter stroke, on left, then repaired by the new glial cell therapy, right. Myelin (in red), is a substance that protects the connections between neurons and is lost due to white matter stroke. The glial cell therapy (in green) restores lost myelin and improves connections in the brain. (Image courtesy of UCLA Broad Stem Cell Research Center/Science Translational Medicine)

The therapy is designed to repair damage to the brain from white matter stroke, a type of “silent stroke” that can kick off years of cognitive deterioration in the form of a disease called “vascular dementia” and can even accelerate Alzheimer’s disease. The new paper is published in the journal Stem Cell Research.

When neurons die, as happens in a stroke, the brain generally can’t grow new ones to replace them. Previously, researchers have tried growing replacement neurons in the lab from stem cells, with some success.

However, this project, led by S. Thomas Carmichael, MD, PhD, chair of the Department of Neurology at the David Geffen School of Medicine at UCLA and interim director of the Eli and Edythe Broad Center of Regenerative Medicine and Stem Cell Research at UCLA, takes a different approach.

Instead of neurons, the stem cells are directed to become cells called astrocytes, a kind of brain cell that supports and influences neurons.

“These cells accomplish many tasks in repairing the brain,” says Irene Llorente, PhD, the paper’s first author and an assistant research professor of neurology at the medical school. “We wanted to replace the cells that we knew were lost, but along the way, we learned that these astrocytes also help in other ways.”

The cells Llorente is making are specifically “pro-repair” astrocytes, which send out chemical signals that induce healing among the cells damaged by the stroke. Where neurons have been damaged, the astrocytes prompt regrowth of the long tendrils, called axons, that are essential for brain connectivity.

Another important brain cell, called oligodendrocyte progenitor cells, or OPCs, are frequently damaged by white matter stroke. Healthy OPCs contribute to forming the protective fatty sheath, called myelin, that surrounds the axons and allows them to transmit electrical signals. The transplanted astrocytes interact with the damaged OPCs and spur them to action, restoring myelin on the newly growing axons.

Acute strokes in large blood vessels cause the symptoms most commonly associated with stroke, such as drooping face or weakness in one arm. But white matter strokes occur in tiny blood vessels, causing small damage that gradually accumulates over time.

“When the stroke happens, you don’t have big symptoms,” Llorente explains. “Now we know that white matter strokes evolve and grow to develop into vascular dementia and can exacerbate Alzheimer’s disease. But they are really hard to catch early on.”

Currently, patients with white matter strokes have no treatments available to repair the damage to their brain.

In a study published in April in Science Translational Medicine, Llorente and her colleagues demonstrated that their astrocyte therapy, applied in mice, stimulated the brain’s repair processes even long after the damage occurred. Mice who received the therapy showed improved memory and motor skills within four months after transplant.

The team also showed that the restorative effects to the brain continued even after the transplanted cells died. Once they awoke the repair systems within the neurons and OPCs, the astrocytes didn’t seem to need to stick around for healing to occur.

From bench to bedside

Demonstrating an effect in the lab is a far cry from bringing a treatment to human patients, however. Now, the researchers have devised a reproducible method of producing large numbers of high-quality cells much faster than they could before.

“The goal of this paper is bringing the technique from the bench to the bedside,” says Llorente. “We’re producing billions of cells. In animals, we inject only 100,000 cells per mouse, but if we are translating this to patients, we’re thinking we will need to transplant 10 to 75 million cells in each patient.”

Stem cells are like baby cells that can grow up to become any kind of cell in the body. Brain cells, bone cells, blood cells – each of these serves a different function, so they all must activate a different set of genes that allow them to perform that function. Once a cell has become specialized, it can’t be re-trained. If liver cells were implanted in the brain, for instance, they wouldn’t be able to change into brain cells.

But stem cells have the potential to be set on a path to becoming any kind of cell. The astrocyte therapy depends on chemically coaxing stem cells to become the right type of astrocyte. If any cells stray onto the wrong path, the therapy won’t work.

Previous methods required up to six months to produce a batch of cells ready to transplant. A method developed by co-author Bill Lowry, PhD, UCLA professor of molecular, cell and developmental biology, dramatically shortened that time. 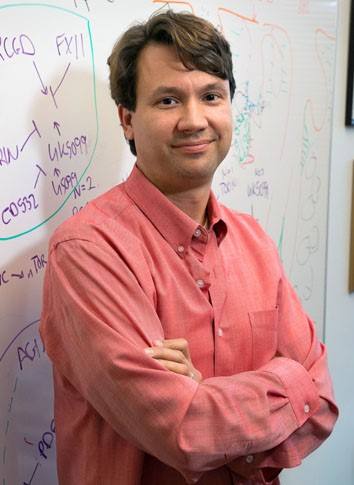 “We can produce the astrocytes in 35 days,” Llorente says. “This process allows rapid, efficient, reliable and clinically viable production of our therapeutic product.”

The therapy will be designed as an “off-the-shelf” product, rather than crafted from a patient’s own cells.

Once the cells are in the brain, they migrate to the damaged area and reproduce – but only for a limited time. Uncontrolled growth could cause a tumor, and the researchers studied the mice carefully to make sure that wouldn’t happen. The transplanted cells multiply for a few months, but then they reach a plateau and stop dividing.

After 10 months, mice who received astrocyte transplants showed no signs of tumors.

The next step for the group will be to meet with the U.S. Food and Drug Administration to determine what the agency will require in order to move forward into clinical trials.

“UCLA is an outstanding environment for making things happen,” Llorente says. “I have an amazing team behind me. Without them, 100% this would not have worked.”

The cell therapy is covered by a patent application filed by the UCLA Technology Development Group on behalf of the Regents of the University of California, with Carmichael, Lowry and Llorente listed as co-inventors. The treatment was used in preclinical tests only and has not been tested in humans or approved by the FDA as safe and effective for use in humans.