‘I just wanted to look like me,’ says the UCLA Health patient, who underwent the series of procedures in 2021 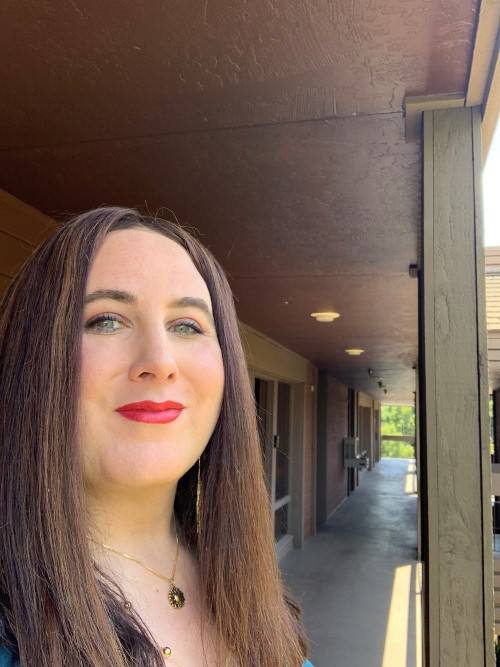 "It's just about feeling like me and seeing that in the mirror," says Chloe Corocoran, after her facial feminization procedure. (Photo courtesy of Chloe Corcoran)

Chloe Corcoran waited years — all her life, really — to see herself in the mirror.

After undergoing facial gender-affirming surgery at UCLA Health, she finally can.

“I just wanted to look like me,” says the 40-year-old New York native.

Corcoran shares her experience with facial feminization surgery and its effects on her well-being in "Being Trans," a podcast series by Lemonada Media that centers on the lives of four transgender people in Los Angeles.

Opening up about her transition for a global audience has been “an exercise in vulnerability,” she says. But hearing stories from other transgender people helped her along her journey, and she’s moved to be that beacon for others.

“I’m trying to reach my own community — especially the people who have not been able to transition yet or are thinking about it and just need to know, yeah, it can be done,” Corcoran says. “I’m one of the last people anyone would have pictured transitioning. I was captain of my high school football team. I played football in college and I even coached college football. People think, ‘I’m this or I’m that, so I can’t transition.’ And I thought that forever. But then I just did it.”

From her earliest days of coming out in 2016, Corcoran wanted facial feminization surgery. Back then, she thought, “I need to get my face fixed.” In the years that followed, however, she reframed that desire.

“It’s not about fixing anything,” she says. “It’s just about feeling like me and seeing that in the mirror.”

What is facial feminization surgery? 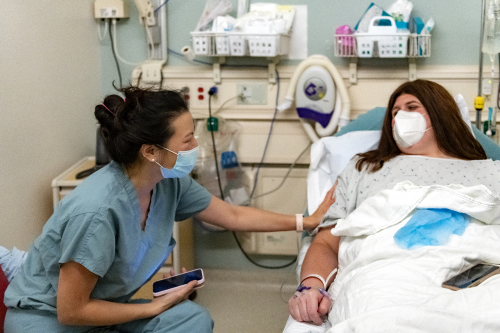 Facial feminization surgery, or facial gender-affirming surgery, refers to a collection of procedures designed to feminize or masculinize the face of a person with facial gender dysphoria. Among the types of procedures, facial feminizing procedures are more commonly sought out by patients, says Justine Lee, MD, PhD, a craniofacial plastic and reconstructive surgeon at UCLA Health who performed Corcoran’s surgery.

The process aims to address both internal and external perceptions of gender, Dr. Lee says.

Internally, an individual may be distressed that their physical characteristics don’t match their gender identity – a feeling of gender dysphoria. Externally, they may be constantly misgendered, which reinforces that they don’t look the way that they feel.

Facial gender-affirming surgery can include various changes to reshape both soft tissue and bony structures, she says. Millimeters of difference separate forehead, brow and nose shapes in masculine and feminine faces.

For instance, the forehead and brow bone protrude about 4 millimeters more on male faces than female ones, Dr. Lee says. Male and female hairlines are shaped differently. Brows sit lower on male faces. Male and female chins are different, with the male chin more square and the female more tapered. Male nasal bones are wider. The angle from the nose to the lip tends to be about 90 degrees on masculine faces and slightly more than a right angle on feminine faces.

Of course, not every patient needs every modification.

“It’s really based on the patient and what they’re seeing, what is really bothering them and causing them to be either misgendered or internally feel those feelings of dysphoria,” Dr. Lee says.

The long road to surgery

Even people with medical insurance who meet all the physical and psychological requirements for facial gender-affirming surgery often have a hard time getting the procedure. Specific requirements may vary by state and insurance provider, but generally include documented diagnosis of gender dysphoria and one or two letters of recommendation from licensed mental health professionals. 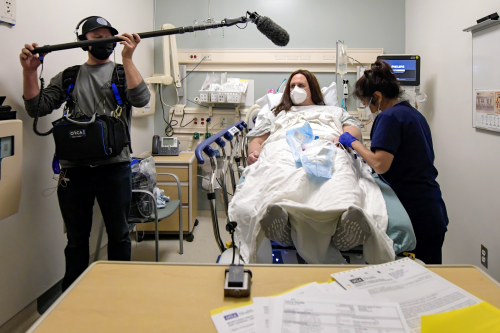 “The insurance issue was incredibly difficult to get through,” Corcoran says. “That’s because almost nobody covers facial feminization surgery. I thought that I would be able to get it multiple times with assurances that it would be covered by insurance. But it never happened until very recently.”

Corcoran first sought facial feminization surgery in 2016 and underwent the procedure in December of 2021.

Facial gender-affirming surgery wasn’t on most insurance companies’ radar until 2016, Dr. Lee says. Before that, “nobody was approving it.”

“Nobody believed that it wasn’t cosmetic,” she says. “Between 2018 and 2020, there were constant fights. And the fights are not done. Either we’ve gotten used to it, or they’ve gotten used to us, but it’s gotten better. We don’t have to fight so hard for every single case anymore.”

Without insurance, out-of-pocket costs for facial feminization surgery can easily exceed $50,000. And surgeons who specialize in these procedures can be hard to find in many parts of the country.

Dr. Lee began her career as a pediatric craniofacial plastic surgeon, repairing clefts and other congenital issues. She developed expertise in performing gender-affirming facial surgery as patients approached her seeking such procedures.

“The trans population was kind of a surprise,” she says. “I started with one patient. And one became two, two became 20 and 20 became 100.”

Specific training for surgeons in gender-affirming procedures is still being developed. Dr. Lee, the Bernard G. Sarnat Endowed Chair in Craniofacial Biology and associate professor of surgery at the David Geffen School of Medicine at UCLA, is one of the leaders working to create such training.

“We’ve brought it into academics,” she says. “When we started doing it, we were figuring it out as we went along. And now that we know, because we’re an academic medical center, everybody knows.”

There are significant ethical debates when it comes to gender-affirming facial surgeries, Dr. Lee notes. While facial feminization may include rhinoplasty and plumping of the cheeks or lips, it’s not cosmetic surgery.

For Corcoran, there’s no question that facial feminization surgery is medically necessary.

“Gender-affirming care is life-saving care,” she says. “It has a huge impact on our safety as well, and safety had a lot to do with me wanting to get facial feminization surgery.”

Transgender people experience verbal, physical and sexual assault at higher rates than the general population, according to studies by the National Resource Center on Domestic Violence and the Human Rights Campaign. 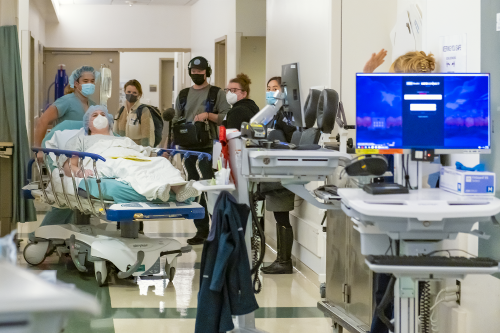 Chloe Corcoran says the most powerful benefit that came from her facial feminization procedure was internal, seeing her outside match how she feels on the inside. (Photo by Joshua Sudock/UCLA Health)

Suicide is the most common cause of death for transgender people, according to Amy Weimer, MD, co-director of the UCLA Gender Health Program. Suicidal thoughts and attempts are higher among the transgender population. Access to gender-affirming care is associated with lower suicide rates.

Corcoran says she thought about ending her life several times before transitioning. She also has experienced attempted assaults since coming out.

“I’m very conflicted about it, because I’m proud to be trans,” she says. “But when people perceive me to be trans, that also opens me up to a lot more violence — especially as we’re seeing in the country right now with the wave of anti-trans legislation.”

When Corcoran moved from the East Coast to California, she drove across the country without once using a public restroom.

“Being less visibly trans is safer on the streets,” she says.

But the biggest transformation the surgery provided has been internal. After several weeks of recovery, once the swelling subsided and the bruises healed, Corcoran finally saw herself — the self she’s always known herself to be — in the mirror.

Her outside now matches her inside, which has been profoundly freeing.

“I want to be alive now. And I didn’t before,” she says. “It’s had a monumental effect on my mental health. The marked improvement I’ve seen in people who are able to obtain this (surgery), as far as their mental health is concerned, is undeniable.”

Dr. Lee has been studying the mental-health effects of gender-affirming facial surgery and finds improvements in patients’ anxiety, depression, positive affect and sense of meaning and purpose, among other metrics.

That Corcoran experienced those psychological benefits firsthand isn’t the only reason she is a great representative to share her experience with facial feminization surgery, Dr. Lee says.

“One of the benefits of treating someone who has lived this way for a long time is they know what they want,” she says. “She’s mature in the sense that she also knows there are hurdles to go through, that it’s a process.” 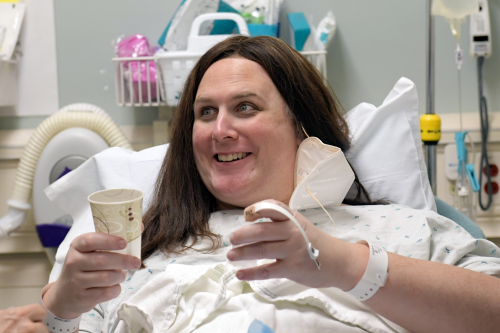 Corcoran confesses that she initially had an “idealized” vision of what life would be like once she transitioned and had surgery. And while things don’t look exactly like that vision — “which was just not attainable for anyone of any gender, ever,” she says — her life has improved in countless ways she didn’t expect.

A new level of comfort with her appearance has inspired her to take better care of her overall health, she says, so she’s eating healthier and exercising more. She’s also more willing to experience a range of emotions, where she was shut down before.

“The self-love piece is the biggest part of it. I care about myself,” Corcoran says. “It’s lessened my depression. It's increased my confidence.  … Not everybody wants or needs facial feminization surgery. But for me, it was incredibly important.”