“It gave me the confidence to know that I can be a competent doctor for others in my community.”

Chase Cates, DO, MPH, knew he wanted to make a difference in people’s lives since middle school. As the inaugural fellow for the David Geffen School of Medicine at UCLA LGBTQ Fellowship, now in its fourth year, Dr. Cates says the program gave him the tools he needed to become a competent doctor for others in his community. Additionally, being in Los Angeles gave him a space where it was much safer to be himself.

“It was life-changing,” he says. “Literally, it taught me everything that I didn't know. Even as a gay physician, I had no idea how to be a physician for other gay men and others in the community.”

Dr. Cates is from and practices medicine in Texas, where a wave of anti-transgender and anti-LGBTQ legislation has gone into effect. He credits his success in Texas to the training, education, resources and relationships from the UCLA LGBTQ Fellowship. 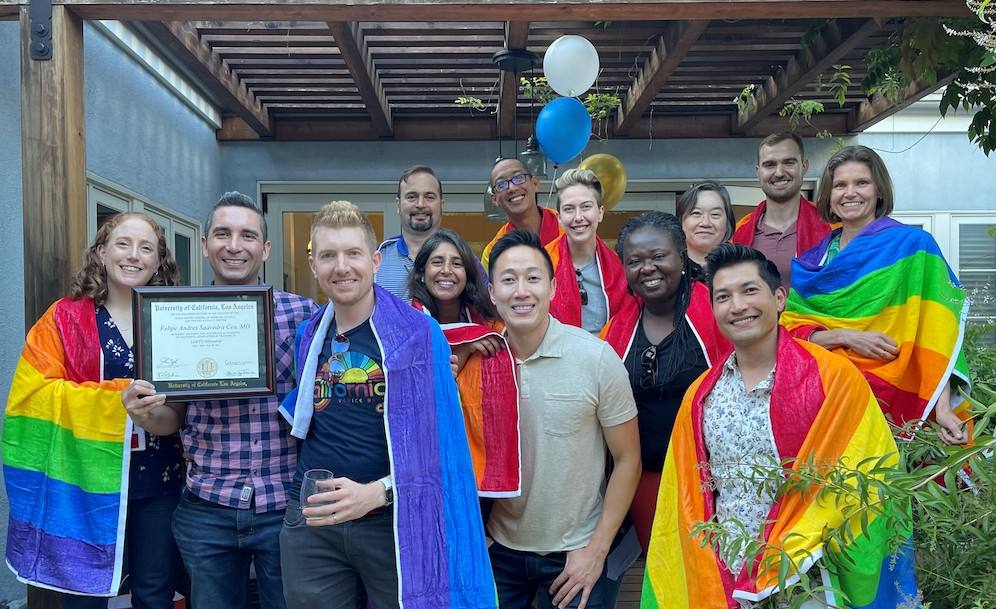 “I wouldn't have been able to do any of this without the training that everybody at the UCLA fellowship gave me because they literally give me all the tools for success,” he says.

“There’s clear evidence that significant health disparities exist among our LGBTQ community and this is further amplified by a lack of healthcare providers that are competent to care for them,” says George Yen, MD, director of the program. “When I was a resident, I never received this kind of training.”

Dr. Yen points to an article from 2011 that shows that the median reported time dedicated to teaching LGBTQ-related content in the entire medical education curriculum was 5 hours.

“There’s a huge need to provide this type of training across the board for all physicians, but our program is focused on primary care physicians who are generally on the frontline of care. The trust that LGBTQ patients have for their primary care doctors will ultimately affect their level of engagement with the rest of the health system,” Dr. Yen says.

The David Geffen School of Medicine at UCLA launched the LGBTQ fellowship in 2019 to address the community’s specific health care needs and inequities. Three years later, the fellowship continues to make an impact on fellows, patients of UCLA Health and beyond.

In developing the LGBTQ Fellowship, Dr. Yen wanted to create a multidisciplinary experience that engaged all parts of the health system and had a strong focus on clinical care.

“We gathered people from across the health system who had experience working with LGBTQ populations, including advocates, researchers and leaders in education. We pulled together 10 thought leaders from various disciplines and thought about what we wanted the LGBTQ fellowship to entail,” Dr. Yen says.

Fellows get training in a variety of clinical and non-clinical areas such as primary care, transgender care, HIV treatment and management, hepatitis B and C treatment, high-resolution anoscopy, urology, gynecology and gender-affirming surgery, substance abuse prevention and treatment, mental and behavioral health, and more.

Dr. Yen says his greatest hope is that fellows will take their skills learned from the fellowship and incorporate them into their daily practices, and become leaders that effectively advocate for this community.

There for those in need

Though Dr. Cates came out as gay during medical school, he was thrown back into a repressive environment during his residency in Arkansas.

About nine months into his residency, Dr. Cates shared with his team that he and his boyfriend (now husband) had become engaged. Discussions on wedding planning naturally followed.

During the same time, a physician assistant completing her training gave the department thank-you letters. In it, she thanked Dr. Cates but the final line sat with him.

“What stood out was the last sentence, which was ‘PS. I hope you find God.’ I was just dumbfounded and hurt,” he says. “It still hurts at times to talk about it. We didn't even talk about religion, but she just assumed that I was this godless person because of who I was dating.”

Dr. Cates says he got to a point where enough was enough.

He made it a point to wear his Pride shoes while working the hospital floors, lecture on LGBTQ-related topics and even added images of drag queens to his PowerPoint presentation slides.

“I wanted people to realize that this is something that’s normal,” he says. “LGBTQ people are everywhere.”

Now, in San Antonio, Texas – one of the largest HIV hotspots in the U.S. – Dr. Cates is providing affirming, quality care to a patient population that needs him.

“There were very minimal transgender and nonbinary patients when I first started and now, it’s exploded to the point where we are having to waitlist people for two to three months,” Dr. Cates says. “I feel like I’ve created a known environment where word got out on the kind of care I provide. This has made me feel like I’m actually making a difference in the community.

“I had messaged Dr. Yen just the other day, saying how thankful I was because I really wouldn’t have been able to do this without him.” 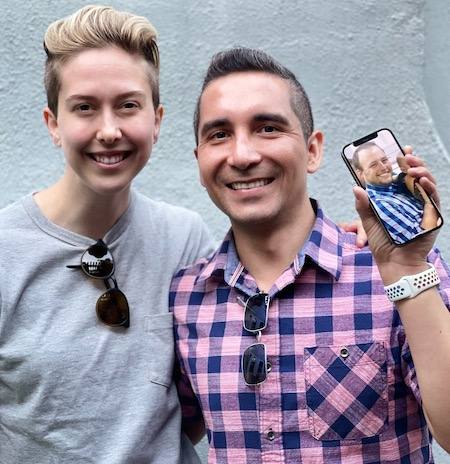 Dr. Saavedra joined the Desert AIDS Project (DAP) Health in 2021, a Federally Qualified Health Center (FQHC). He says the knowledge and experiences gained during the fellowship, along with his bilingual and bicultural skills, have allowed him to make a difference for a growing population of Latinx LGBTQ patients in the Coachella Valley.

“It’s been super rewarding, especially because I'm from Chile and my primary language is Spanish. I’m able to provide the same kind of services in both English and Spanish, like primary care, transgender care, HIV treatment and prevention and high resolution anoscopy,” he says. “I'm not bragging here, but I'm fully booked until mid-June.”

Dr. Saavedra says the holistic fellowship helped prepare him for “the real world.”

“When I moved to the desert, I didn’t realize how prevalent methamphetamine use was. I feel that the fellowship was strong in making me feel more comfortable treating patients with substance use disorders and starting conversations without judgement,” Dr. Saavedra says. “I’ve been able to apply the behavioral health skills from the fellowship too.”

Another aspect of the fellowship that he values is the relationship-building.

“Even though I graduated and am working for another institution, I know that I can go back to my preceptors and attendings and they’re always willing to help,” Dr. Saavedra says.

Support to feel seen and heard

The mentor support and relationships aspect is something that Rebecca Rada, DO, MBA, the current fellow, is most impressed by.

“I was incredibly nervous and had a lot of anxiety about starting the fellowship,” Dr. Rada says. “But since I’ve met everyone in person, they’ve all been the most kind, welcoming and affirming people. I feel like being around diverse mentors and having a lot of LGBTQ and affirming doctors who can guide me has been one of the best experiences.”

Dr. Rada knew that LGBTQ care was what they wanted to pursue, but the path to get there was unclear.

“I would look at the CDC website that shows LGBTQ-specific clinics and kept a list of places that I wanted to work for,” they say. “When I came across the LGBTQ fellowship at UCLA, it was a dream because it included everything I wanted.”

Dr. Rada says the fellowship couldn’t have come at a better time.

“I came into this with really low confidence and felt like residency had knocked me down in terms of ostracizing residents for standing up and calling out inequities. I feel like the fellowship [at UCLA] has helped me thrive as a human and also as a doctor,” they say.

Additionally, it was through the fellowship that Dr. Rada realized they were nonbinary.

"Even just being able to talk through my own gender journey has been amazing and I don't feel like I would have ever gotten to that point, honestly, if I hadn't gone through the fellowship.”

One of the components of the fellowship addresses behavioral health through coursework and workshops offered by UCLA partner Antioch University, a master’s program with a designated LGBTQ+ affirming track for future therapists.

During a class discussion on gender and identity, the class was asked to think about which words they associated with their gender.

“I couldn’t even answer the question,” Dr. Rada says. “It was in that moment that I realized I didn’t fully identify with either gender, and it felt really powerful to come to that conclusion.”

Dr. Rada became more comfortable using they/them pronouns in the Gender Health Clinic because it felt like a safe space to do so.

“I ended up changing my profile to include she/they pronouns, so that felt incredibly affirming to put that out there. Even just being able to talk through my own gender journey has been amazing and I don't feel like I would have ever gotten to that point, honestly, if I hadn't gone through the fellowship.”

“I told a patient and their family about being nonbinary when they asked why we do this type of work (gender health) and Dr. Weimer got to hear that from me for the first time. It was just incredible to be able to share that experience and talk through that afterwards with her,” Dr. Rada says.

After the fellowship ends, Dr. Rada will stay at UCLA to focus on gender health, working with both adolescents and adults. They hope to continue working on medical education at both the individual and systemic level to further instill change.

Dr. Yen says it’s clear that the fellowship has made life-long impacts for both the fellows and their patients.

“This has been a unique opportunity to unite faculty for a common mission that we all had, but because we were all from different departments and divisions, we just didn't overlap. Now, as a result of the fellowship, we've created additional new programs for our patients and a strong faculty network," he says.

Fellows have an opportunity to weigh in on the Early Authentic Clinical Experience, a first-year component to the DGSOM HEALS medical education curriculum.

​"Our LGBTQ fellows have played key roles in shaping the education for all our medical students and trainees, making an impactful change for our community," says Dr. Yen.

Learn more about the LGBTQ Fellowship at the David Geffen School of Medicine at UCLA.