‘Meant to be here and more to give’ 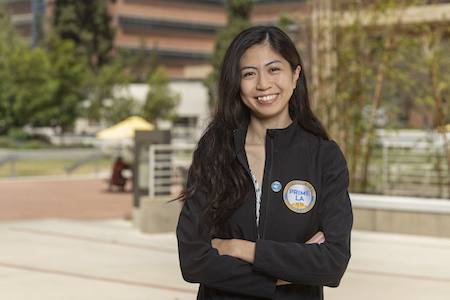 Tam Au at David Geffen School of Medicine in Westwood on Tuesday, May 31, 2022. (Photo by Joshua Sudock/UCLA Health)

“I’m trying to stop and preserve this moment a little bit longer. It feels like a ball is rolling downhill,” says Tam Au, a graduating student at the David Geffen School of Medicine at UCLA. “There were times when I didn’t even know if I would get to this point.”

On June 3, she, along with her peers in the class of 2022, will graduate from the David Geffen School of Medicine and embark on a lifelong journey of healing and care.

“I’m very excited to actually get to see patients on a daily basis and put my skills into practice. At the same time, I’m eager to find ways that we can further improve patient care in our health care system,” she says. “There’s so much more growth to be had.”

Au matched in family medicine at Keck Medicine at the University of Southern California, where she was drawn to the diversity of East Los Angeles communities and the inequities they often faced.

She says she felt aligned with the program’s mission in social medicine and solidarity with the community.

Au was born and raised in Little Saigon, in Orange County.

“Growing up, a lot of times what I thought was normal was not so normal,” she says of her upbringing as a “latchkey kid.”

Because her parents worked long hours to provide for her family, Au spent a lot of time alone or with her older sister. Her family could not afford many extracurricular activities so she devoted herself to academics. As first-generation Americans (defined as the first in her family to pursue higher education), Tam and her sister helped her family navigate complex systems such as education, health care and public benefits programs, like Medicaid.

“That really shaped my perspective on how important it is to have a sense of community and have a sense of ability to help others access resources that may not be available to them,” she says.

In college, Au was part of a group called Vietnamese Community Health at UCLA, where student volunteers provided health screenings and brought resources to her community in Little Saigon.

Though it felt good to give back, Au says it never felt like enough. She says the resources shouldn’t have been missing from the community to begin with.

“That led to my questioning of the status quo: why certain systems perpetuate inequities and then that motivated my interest in eventually pursuing medicine,” she says. “I was actually anti-medicine in the beginning, because my parents have such mistrust for doctors because of their own experiences.”

Witnessing medical mistrust and the inability to afford quality care skewed her views, she says. 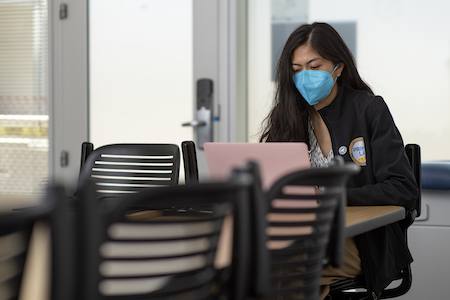 Tam Au will graduate from the David Geffen School of Medicine at UCLA on June 3. (Photo by Joshua Sudock/UCLA Health)

During her gap year prior to medical school, Au worked for the Department of Public Health in Sacramento, where she met policy leaders tailoring health programs for underserved communities.

When she began medical school, she joined the UCLA PRIME-LA program, a concurrent dual degree program that allows students to receive an advanced degree in addition to their medical degree, while focusing on leadership and advocacy to address health care disparities in medically underserved populations.

Additionally, Au was one of the inaugural leaders of the First Generation at DGSOM at UCLA student organization, an extension of the larger UCLA-wide First To Go Initiative, highlighting the first-generation experience in higher education.

“It started with asking, how can we design something that really fills this niche experience and space that feels missing for a lot of us,” Au says.

With guidance from Dr. Alejandra Casillas, students brought to life a program centered on mentorship, networking and advocacy.

“It started with a blank sheet of paper and a lot of the programming we created is still running four years later,” she says.

For her, embracing her first-generation identity has been one of the many challenges of medical school.

“I think you feel that you have such a massive amount of responsibility, particularly to your family. You're the ones your parents call when they need to pay a bill or when they have a question about something,” Au says.

It took time for her to learn to maintain a work-life balance for her own wellness, she says.

“I think a lot of first-gen students can relate to this,” Au says. “You're balancing so many different things, like how to study, how to balance your family responsibilities, how to still pursue your passions in the community, and in other fields that you're interested in.”

A bright spot throughout medical school was her involvement with peer tutoring with the Academic Support Office.

“It really helped me to have a peer tutor and I wanted to give back so I became a small group tutor. Now many years later, I’m one of the head tutors,” Au says.

She also worked with Dr. Allison Mays to come up with community-based solutions to address social isolation and loneliness among geriatric patients. Their work in the Leveraging Exercise to Age in Place (LEAP Study) to connect older adults to group exercise classes has evolved into an integrated part of the Cedars-Sinai health care system.

“I think COVID has only highlighted how much more impactful social isolation or loneliness can be not only for older adults, but for everyone,” she says.

Though getting through medical school during a pandemic was bleak at times, Au remained hopeful. Staying connected to her community and creating a lasting impact, she says, has driven many of her pursuits and ultimate decision to become a family medicine doctor. She hopes to be a pillar and advocate for her community.

Her advice to first-year medical students looking at the long road ahead:

“Realize that you are meant to be here and you have so much more to give. Know how far you've come and how far you have to go. It's easier said than done, but really recognize it and find ways to build a support system that will uplift you and push you to be a better version of yourself – not only for your own sake, but for your patients' sake as well.”

“Everyone's rooting for you, and we're here to get through it together.”

‘Something we’ve been waiting for’: A 2022 DGSOM graduate realizes his family’s dream