‘Something we’ve been waiting for’ 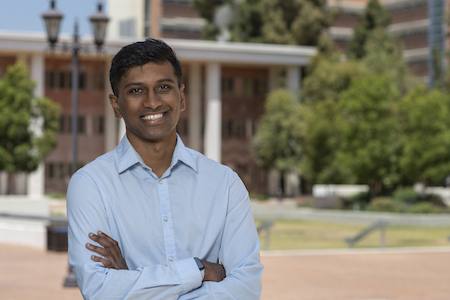 Vikram Krishna at David Geffen School of Medicine at UCLA in Westwood on Tuesday, May 31, 2022. (Photo by Joshua Sudock/UCLA Health)

Vikram Krishna, a medical student at the David Geffen School of Medicine at UCLA graduating this year, jokes that his parents, like many other immigrant families, wished for their children to become doctors. Though he’s close to realizing his family’s dream, he had very different plans when he was a kid.

“I thought I was going to be drafted to the Los Angeles Lakers,” he says. “Then I tried out for my freshman high school basketball team. I was 5'-2" and 97 pounds. So no, I didn’t make the team right away.”

Krishna and his family immigrated to Torrance from Myanmar when he was 5 years old.

In high school, Krishna took a liking to science and at 16, he began volunteering at Harbor-UCLA Medical Center. It was then that his interest in medicine materialized.

“I loved being in the hospital seeing all the adults walking around in their white coats. They were like superheroes to me,” he says. “And I wanted to be just like them when I grew up.”

He attended Boston College and enrolled in its pre-medical program.

As he prepared for medical school at the David Geffen School of Medicine, Krishna says in addition to the coursework, and the tests, his main concern was how he would make friends.

“Because I'd spent most of my time on the East Coast for undergrad, I didn't know anybody in medical school. I had this huge worry about meeting people and making friends,” he says.

Since then, he’s gained a close group of friends that share experiences, joys, frustrations and worries.

During the pandemic, it was especially challenging for students to connect – with each other and with patients.

“That whole third year, it's such a blur to me,” he says.

During his internal medicine rotation at the end of 2020, Krishna remembers feeling frustrated that he couldn’t do more.

“I would leave for the day and come back and our list of patients would be two or three less people because they had passed away overnight,” he says.

Krishna says he felt helpless and emotionally triggered when he would watch the news.

“I would just get emotional and I couldn't even watch it on TV because I felt like I'd seen it enough in the hospital and I didn't need to see it again.”

One of his clinical duties was to check on the patients and update their family members. A patient that Krishna monitored had made improvements, was able to walk around the room and was using less oxygen.

“When I called his daughter to let her know he was doing better, she was like ‘oh my God, thank you so much. We haven't been able to hear from anybody yet,’ because it was a weekend and everyone was really busy,” he recalls.

Krishna assured her that he saw her father every day and that he was improving. 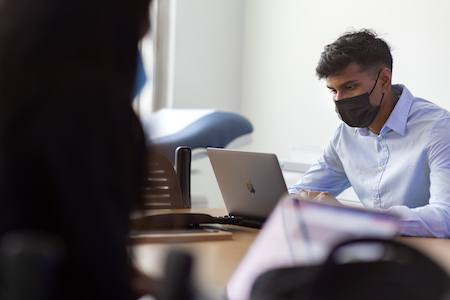 Vikram Krishna will have 20 family members at his June 3 graduation from the David Geffen School of Medicine at UCLA. (Photo by Joshua Sudock/UCLA Health)

What stuck with him was how relieved she was. Though he felt frustrated by the COVID-19 pandemic and its destruction, he says, he felt immense gratitude for fellow trainees, the residents taking care of the patients and the attendings whose job was to provide the utmost care.

“I feel so thankful because it's such a unique experience that everyone's going through and not everybody understands that,” he says of this training. “I'm so lucky to go to such a great med school that offers these programs.”

Krishna says he’s also grateful to have his family nearby. He comes from a large Indian family and 20 of his closest family members will attend his graduation on Friday, June 3.

Growing up, his grandmother was his and his younger brother’s main caretaker while their parents worked. “She really instilled in us values about education and hard work that have made me who I am today,” he says.

He tried to embody those values while in medical school, including leading a student community-outreach organization called Anatomy Academy, which develops health education lessons for underserved children living in transitional housing.

The experience was a nice way to share what he’d learned and apply it to the children who need it the most, he says. It also helped him realize how much he loves working with children.

In March, Krishna took a month-long global-health elective working at a safety-net hospital in Mumbai, India, where he observed rare pediatric surgeries.

“I had such excellent mentors when I was over there, and I really got to see health care delivery in a completely different setting,” he says.

For his residency, Krishna has matched in general surgery at Cedars-Sinai Medical Center in Los Angeles and hopes to further subspecialize in pediatric surgery. He plans to continue exploring global health care delivery in his goal to bring quality care to underserved populations.

Realizing he’s going to become a doctor after all that he and his family have overcome has him in a bit of shock, Krishna says.