Mejia, now 46, went on to cover history-making events around the country, including working 20 years as a photographer and show producer for CNN. 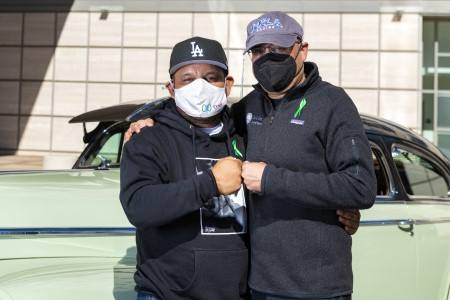 Louie Mejia, left, was diagnosed with advanced kidney disease at a hospital in Orange County, but was confused about his future until he met with UCLA Health's Dr. Anjay Rastogi, right, clinical chief of Nephrology at the David Geffen School of Medicine at UCLA. (Photo by Joshua Sudock/UCLA Health)

His most recent transformational moment came in December when he got an appointment with UCLA Health’s Anjay Rastogi, MD, PhD, clinical chief of Nephrology, at the David Geffen School of Medicine at UCLA.

Although Mejia had been diagnosed with advanced kidney disease a year before in Orange County, he said he felt depressed and confused about his prognosis, unsure whether it would cost him his career or even his life.

In an hour-long video call on a Sunday morning, Dr. Rastogi counseled Mejia, providing information, reassurance and a treatment plan.

“I felt so hopeless before this conversation I had with him,” Mejia said. “I felt like I’m going to die or I’m going to have to go on dialysis. I didn’t get the answers to any of my questions until I had the Zoom call with Dr. Rastogi.”

Dr. Rastogi said Mejia’s kidney function is about 20% of what it should be. He says Mejia will most likely need some form of kidney replacement therapy within a year or so, but he might be able to forgo dialysis by getting a pre-emptive kidney transplant from a living donor.

“He came across, from the first moment I saw him, as a very genuine person,” Dr. Rastogi said. “I also saw a very scared human being. He had very limited insight into his disease state and his path forward – a path that his family would take as well.”

Under Dr. Rastogi’s care, Mejia, who lives in Fullerton, says he’s now confident he can manage his health and help others who are in a similar position discover life-changing care and support at UCLA.

“Now I feel like I’m ready for the challenge,” he said. “I’m ready for whatever is coming. And now I feel so empowered. This is just because of Dr. Rastogi and the UCLA CORE Kidney Health Program.”

To show his gratitude, Mejia plans to combine his experience as a troubled youth with his newfound knowledge, by volunteering with the CORE Kidney Health Program, to provide patient support and advocacy. He wants to develop a special focus reaching out to low-income, Spanish-speaking communities like the one he came from.

“This is about giving other patients hope,” Dr. Rastogi said. “This is saying, ‘If I can do it, you can do it too.’ I find these stories highly inspirational.”

In November of 2020, Mejia was diagnosed with advanced kidney disease after experiencing symptoms of fatigue and noticing that his urine looked foamy. He had suffered a heart attack in 2011 and has diabetes. Both heart disease and diabetes are risk factors for kidney disease.

“My job being a journalist is pretty demanding,” Mejia said. “I had a really high stress job and I wasn’t really taking care of myself the way I should have.”

Mejia saw a nephrologist in Orange County who advised him that he would likely need to start dialysis and eventually undergo a transplant.

“There was really no treatment plan,” he said. “It was just about maintaining the function that I had.”

Mejia, a producer for NewsNation and a married father of one son, feared the dialysis – which he was informed takes about three hours per session, three times a week – would impede his ability to work.

"This is the whole system working together. It doesn't matter if you're in Westwood or Westlake Village or the South Bay - you have access to everything that UCLA does."

Dialysis is a treatment that removes waste and excess fluid from the body.

After speaking with Dr Rastogi, Mejia learned there are different types of dialysis and the one he was offered is called in-center hemodialysis. There is also home dialysis, which a patient does in the comfort and convenience of their home.

Mejia said he was pleasantly surprised to learn of home dialysis and that he might be eligible for a pre-emptive transplant, which would preempt dialysis completely provided he has a suitable donor.

In October 2021, Mejia saw a social media post from a friend and former colleague, Elizabeth Espinosa, with whom he worked at CNN and KTLA. It was a picture of her with comedian George Lopez and Dr. Rastogi. Dr Rastogi was being honored by the George Lopez Foundation for his contributions to kidney care and community at an event to raise awareness about kidney disease and organ donation.

Mejia had met Lopez years ago when he appeared on the CNN entertainment news magazine show he produced. Mejia knew Lopez had received a kidney transplant in 2005.

He decided to message Espinosa, a UCLA alumnus, about his own condition.

“It was therapeutic for me to tell someone because only my wife and some immediate family knew at that point,” Mejia said. “She then put me in touch with Dr. Rastogi.”

Espinosa, who met Dr. Rastogi roughly seven years ago when he appeared on her KFI-AM 640 talk show, said Mejia’s words brought her to tears. Her mother also became a patient of Dr. Rastogi’s, whom she describes as a lifesaver who works with urgency.

“He is not just a clinician, not just a researcher, not just a medical professional overseeing an incredible department at UCLA, he actually is a very caring human being,” Espinosa said. “He’s very relatable. He is approachable. He is a doctor of the people for the people.”

Dr. Rastogi reviewed Mejia’s medical records and lab reports. He scheduled a Zoom meeting for the weekend so they would have plenty of time to talk.

“This is really a problem in health care right now – that we don’t spend enough time speaking with patients and listening to what their needs are,” Dr. Rastogi said. “We talk about patient-centric medicine but how can you do that if you don’t know that patient or their needs?”

Dr. Rastogi connected Mejia to a UCLA primary care doctor, a cardiologist, an endocrinologist for his diabetes and a sleep specialist for apnea. Mejia has also had sessions with a psychologist.

“They’re so patient, they’re so thorough,” Mejia said. “They asked me questions and listened to me – it’s not like before where I just felt like I was a number. I feel like I’m part of a family.”

Dr. Rastogi serves as Mejia’s nephrologist and provides oversight to his overall care, while preparing him to eventually undergo a kidney transplant. A kidney could be donated by his wife or sister within a year.

“It’s all of us working as a team,” Dr. Rastogi said. “This is the whole system working together. It doesn’t matter if you’re in Westwood or Westlake Village or the South Bay – you have access to everything that UCLA does.”

Dr. Rastogi and Mejia met in person for the first time over dinner at an Indian restaurant in Westwood. He talks to Mejia weekly.

“He’s doing much better both physically and mentally,” Dr. Rastogi said. “He’s in a much better place.”

Mejia was born in Compton and while in elementary school moved to Carson. By age 12, he’d joined a gang and started dealing crack, he said.

When he was around 17, his family moved to Ventura County. He took a career counseling class at his new high school, where he wrote an essay about his experience living in rough neighborhoods and selling drugs. His teacher loved the piece and got it published in a local newspaper.

“She asked me what am I doing with my life now and I said, ‘I want to be somebody,’” Mejia recalled.

After the essay was published, a small news station in Oxnard invited Mejia to attend a panel discussion about the increase in drive-by shootings in the community. The news director liked Mejia so much that after he dropped out of high school and turned 18, he hired him as a janitor at the station.

A few months later, the news director asked him what he really wanted to do. While Mejia swept the floors, he’d always been interested in how the cameramen worked. The director handed him his car keys and gave him his first assignment – a weather shot.

The next day, he was promoted to being a full-time photographer. Mejia went on to cover major events including the Northridge earthquake. At CNN, he covered Hurricane Katrina and the 2008 presidential election.

Mejia sees parallels between how he overcame difficult circumstances to find success and his latest health challenge, where again, the odds seemed stacked against him.

Dr. Rastogi said that when he asked Mejia about his health history, he shared about his years in the gang.

“I find that story so powerful,” Dr. Rastogi said. “I say, ‘Louie, this is nothing. You’ve been through much worse.”

In addition to learning from Dr. Rastogi, Mejia has met with UCLA Health CORE Kidney volunteers, known as ambassadors, who are current or former patients, including those who have donated a kidney. They’ve answered his questions and provided emotional support.

When Mejia decided he wanted to join their ranks, Dr. Rastogi at first asked him to wait.

Mejia said that growing up he never learned about healthy lifestyles or disease prevention.

According to the National Kidney Foundation, a plant-based diet may slow the progression of chronic kidney disease. In January 2021, Mejia went vegan and has since lost 72 pounds. He said the weight loss has not only stabilized his kidney function but allowed him to go off diabetes medication.

He said he’s excited to share about diet and nutrition in his outreach.

“I want to give back now,” he said. “I have talked to friends that I grew up with. These are people that did prison time. They’re asking me for advice.”

Mejia said he believes that by giving back he can help right some of the wrongs of his youth.

“My family and I will be forever grateful to Dr Rastogi, the CORE Kidney Team and UCLA Health. I just get so amped up about how good this program is for the community that I came from,” he said. “Now I have a purpose. As a man, as a father, as a husband, it fills me with so much. Maybe this happened for a reason. Maybe this was my destiny.”